For the past four weeks, I’ve been partaking in the Keto diet. As you’re probably already aware, its the hottest diet trend out. A lot of people rave about drastic weight-loss effects of ketosis (I’m about 15 pounds down myself), but I knew that abstaining from carbs and sugar might be difficult for me; a tortilla-potato-bread- rice fanatic. The one upside is being able to still enjoy things I love dearly like cheese, eggs, bacon, seafood and dairy, which help me keep my mind off the other stuff that I can’t have.

Nonetheless, sticking to Keto every day has taken some serious will-power, because I started getting bored with my meals and my forbidden cravings intensify. Last week while dining out with one of my girlfriends, my eyes literally weld up with tears as I watched her eat potatoes and one piece of bread after another. That weekend during brunch with my mother, who ordered shrimp & grits, I just about lost it.

“What I would give to eat a bowl of creamy grits right now!” I remember asking her how they tasted, hoping she’d say they weren’t all that, just to make myself feel better about not being able to have some. In between bites, she said the most brilliant thing ever. “Why don’t you make cauliflower grits. Have you ever had it?”

Um, no!?! I’d made cauliflower puree many times, which is an awesome substitute for mashed potatoes and I’d even made cauliflower “rice” in the past, but it never occurred to me to make them into grit form! And apparently, I’m the last to know about this dish because I noticed another food blogger that I follow feature a similar dish recently. So I did some digging and developed my own take on Keto-approved Shrimp & Grits.

The key to making the grits is very simple. I bought two whole heads of cauliflower. In a blender or food processor, you chop pieces of one whole raw cauliflower into a fine grit texture. I boiled half of the other head. Once that one was fully cooked, I added those pieces to the food processor with a little heavy whipping cream. Then, turned up a skillet to medium/high heat, and cooked the grainy cauliflower for about ten min. After that, I added the puree cauliflower to the grits, with some butter, smoked gouda, grated parmesan and fresh herbs like chives and thyme.  Combined with the cajun shrimp & tomato sauce mixture, the cauliflower grits left me stunned. This dish is absolutely delicious!!

I prepared it for a few friends, only mentioning that I wanted them to try the Shrimp & Grits that I was making for my blog. They ate every damn bite. My sister’s husband and brother-in-law were quite fond of the grit alternative too–and if you know them, its pretty darn difficult to get those men to try new things. So if you’re on the Keto kick, or simply want to explore an alternative to regular grits, please try this recipe. Because I’m having such a good time with cauliflower, just wait til I post my fried “rice” recipe. It’s going to be out of this world!

You can add sausage, lump crab, lobster or chicken to this recipe! I added lump crab to mine, and it blended perfectly. 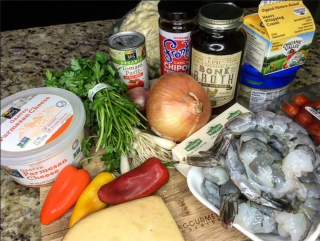 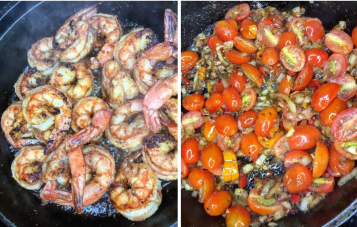 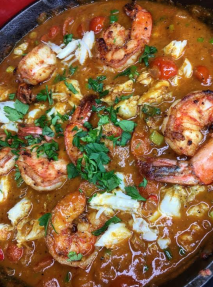 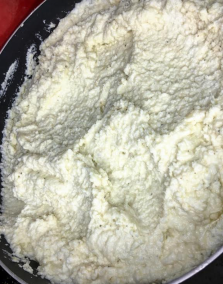