A lot of really cool seafood and Asian fusion restaurants offer this dish. The most popular restaurant known for Bang Bang shrimp is Bonefish Grill. I’ve actually never had theirs but people fucking swear by it like they do with Beyonce. I first had it at my favorite sushi spot, Umi Atlanta. There, Chef Fuyuhiko calls it “rock shrimp.” Oh baby…it’s truly sexual. If you are ever in Buckhead you MUST try his version. I’m telling you, it’s something extraordinary. But the recipe I’ve concocted here is a very close second!

What makes this dish such a delight is honestly just the sauce. It’s tangy, creamy, sweet and spicy–literally covers every component on the flavor pyramid. The ingredients are simple: mayo, and Thai style chili sauce. Everyone adds a little something different. While experimenting with different flavors I found that Thai garlic sauce is a must! They are both red and can be found in most grocery stores. If you go to an Asian market it’ll be a breeze to find. But I easily found them both at a Whole Foods and Publix near my house. I added a little rice wine vinegar for that Asian fusion tang that just elevates most sauces.

The biggest trick that I found worked wonders for frying the shrimp was coating it in buttermilk and egg, which I whisked with a few tablespoons of sriracha before transferring to the cornstarch/panko before frying.

But you want to know what absolutely blew my mind?? Frying cauliflower and tossing it in the sauce. Yes, cauliflower. A friend of mine is allergic to shrimp, and I didn’t want her to feel left out. So, I cut up the head of cauliflower I had sitting around in my refrigerator and did the same thing that I did to the shrimp. My heart nearly exploded when I tasted it for the first time. It’s pretty euphoric texturally, and a few of my friends said they actually enjoyed the pieces of creamy-crunchy Cauliflower over the actual shrimp. Crazy right?!

This dish is one of those that will leave you kicking yourself, wishing you’d brought home an extra pound of shrimp because they go fast. I scarfed down about three servings without even realizing it because of I’d fallen into the food matrix. Oh, and if you know how to make a tempura batter, it’s killer that way too!! I’ve even grilled some shrimp and tossed it in the sauce because I was pretending to want a healthier alternative. And it was wonderful that way too. But frying it is the way to go, so pick another time to be on the fake healthy shit 🙂 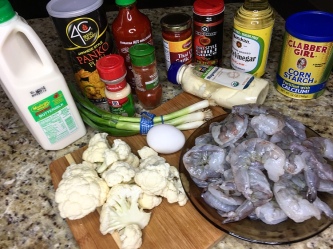 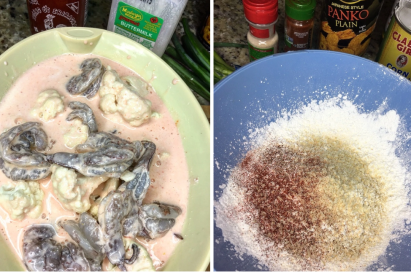 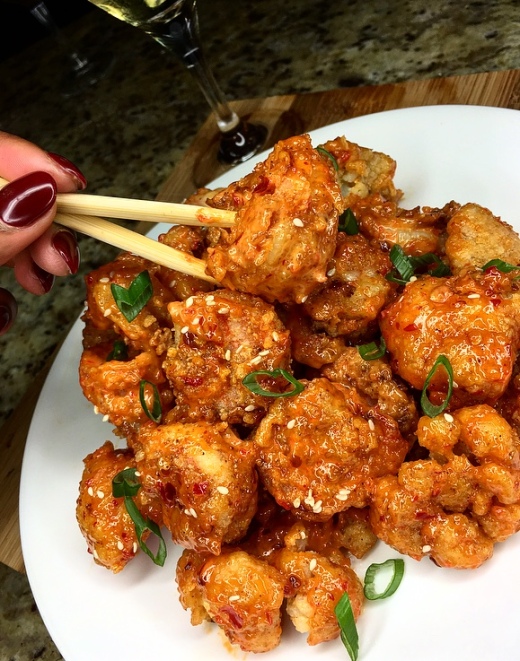