I have to be honest, I didn’t have an ounce of enthusiasm when I decided to come up with a recipe for meatless burgers.

The idea alone is such debauchery. It literally gave me anxiety. Replacing juicy ground angus with smashed up beans and shoving it between two buns sounded like the opening of a horror film.

My relationship with meat (poultry too) is so unbreakable and so deeply passionate, that I couldn’t imagine a reasonable motive to eat a burger without it–let alone have the audacity to still call it a burger.  And nowadays of course, modern science and health scholars are doing everything they can to convince us that meat will send us to an early grave. Whatever the case, I’m not fazed. I will perish peacefully if I’m gnawing on a succulent seared lamb chop as I take my last breath.

Anyways, the only reason I decided to explore the idea ok creating this dish is because of YOU; my vegetarian readers. The fact that you all follow my blog and social media faithfully–patiently waiting for a day like today–compelled me to dedicate something special to show my appreciation. So I chugged a couple glasses of wine, grabbed my laptop and searching the web for answers as to what the hell I could substitute meat with.

From what I found, black beans are key component. Most mash the beans into a thick paste. Then finely chop some bell peppers, onions and garlic–or throw them into a food processor to get thorough mince. An egg and breadcrumbs are added to bind everything so that it can be formed into a patty. I also noticed several recipes called for a little rice, but I decided to use quinoa because it’s a smaller and more subtle grain. But to me, all that still sounded like it would probably taste as dry and flavorless as cardboard.

That’s when it hit me. I needed to act as if I were making an actual burger. What do I usually do with ground meat before I throw it on the grill?

So I decided to add some cumin, chili powder, salt, pepper, and (my secret weapon) “liquid smoke” marinade. Whenever I make sliders or burgers, I add a few tablespoons of this store-bought marinade to the bowl of meat before I form the patties. It gives them an incredible backyard flavor and keeps them juicy. You can find it in a small jar in the aisle that carry barbecue/steak/hot sauces. If you can’t find it, use a few tablespoons of Worcestershire steak sauce. Ain’t a grocery store in America that doesn’t sell it…

Lastly, I decided to add some chopped portobello mushrooms to the concoction for texture. That way, I could at least pretend that the smooth bites of sautéed mushrooms were some form of meat. For my own sanity.

As the veggie patties sizzled in the pan, I reluctantly dressed my brioche bun with the usual fixings. The last ditch effort came in the form of a homemade chipotle mayonnaise (a tablespoon of chipotle peppers in adobo and 3 tablespoons of mayo mixed together.) It’s one of those sauces that can resurrect any sandwich back from the dead. And of course, I owed it to myself to use my favorite smoked muenster cheese. Then came the time to take that first ill-fated bite. I held it in my hands, hovering over the trash can–just in case I felt the need to immediately spit it out. I took a deep breath and opened wide….

Like actually good. I never would have imagined it, but I actually finished the whole thing willingly.  Surely, it couldn’t hold a candle next to my usual beef/lamb burgers, but I wasn’t mad at it. At all.

The texture is very unique, it would take me some getting used to–not that I would ever feel compelled to do so. But for those of you who are fans of veggie burgers, especially the black bean variety–you might actually fall in love with this recipe. I shared it with my neighbor who is a situational-vegan, and he gave it two thumbs up. From what I detected, the marinade, mushrooms and seasoning really helped it’s cause. I also tried one of the patties on a lettuce wrap instead of the brioche bun. In terms of taste, I actually think it tasted better with lettuce over bread. Feel free to cook them in the oven instead of on the stove as I did here if you like. Just preheat oven to 375 and place patties on a greased pan. Bake 8-10 ten minutes on each side.

Keep in mind, this is my first and only attempt thus far at making these, and I can only vouch for this particular recipe. So if you choose to give it a shot, please email me and let me know your honest opinion. If you feel like it’s missing something, tell me! Some of my clients inquire about vegetarian cuisines, and I want to feel confident about what I serve–even if it’s something I don’t particularly fancy myself. 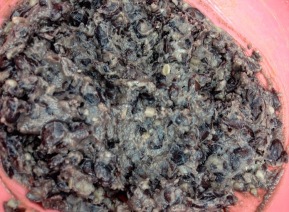 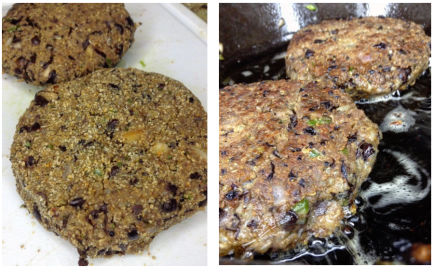 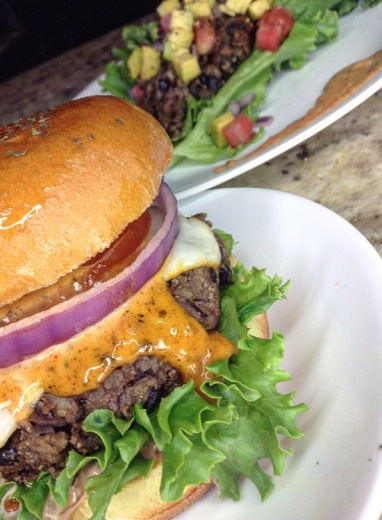